Before I get going any further, I’ll just leave this photo here as a friendly reminder of what our house looked like when we bought it.

There was nothing WRONG with the paint color, per se. Well, actually, the flippers did a pretty shitty job of painting the porches and trim… AND they painted the roof (a real “wtf?” moment for us when we discovered that!) But part of our deal was that the seller had to put a new roof on the house at closing. When the roofers asked us if we wanted the same shingles, we said yes, assuming they would be black (since, you know, the roof LOOKED black…which turned out to be paint…) But, they weren’t.

I like to think of this roof color change as moving our house’s style from the goth look to more grunge. More Daria Morgendorfer than Morticia Addams. While I dig both of those styles in clothing, it wasn’t really working on the house. I felt like our house just looked so drab, blending in to the background (it was kind of painted camo colors, after all). And the dark trim that I had been totally okay with when I thought it was black now looked a lot more like muddy brown.

But getting a house painted is either expensive or time consuming, depending on the route you decide to take, Initially we were all, we-just-bought-a-house-and-aren’t-going-to-spend-any-money. Then we were all, oh-crap,-our-bathtub-leaks-and-we-have-no-kitchen-ceiling,-better-spend-money-on-that. And THEN we were all…

Fortunately, that disaster was covered by our insurance (after the deductible, of course). Still, it kind of sucked to have a hole in the side of our house in the middle of winter. Oh yeah, and without power to the house, we had no heat! Fun stuff. Let’s get a close up on that hole (please excuse the fact that these are out of focus; it was the middle of the night and we were cranky).

That black thing is the pipe that goes to our toilet, for reference. The “good” news was, our kitchen ceiling was already open, so we could stuff some cardboard up there to block the draft!

Anyway, we got it patched up pretty quickly, thanks to State Farm. 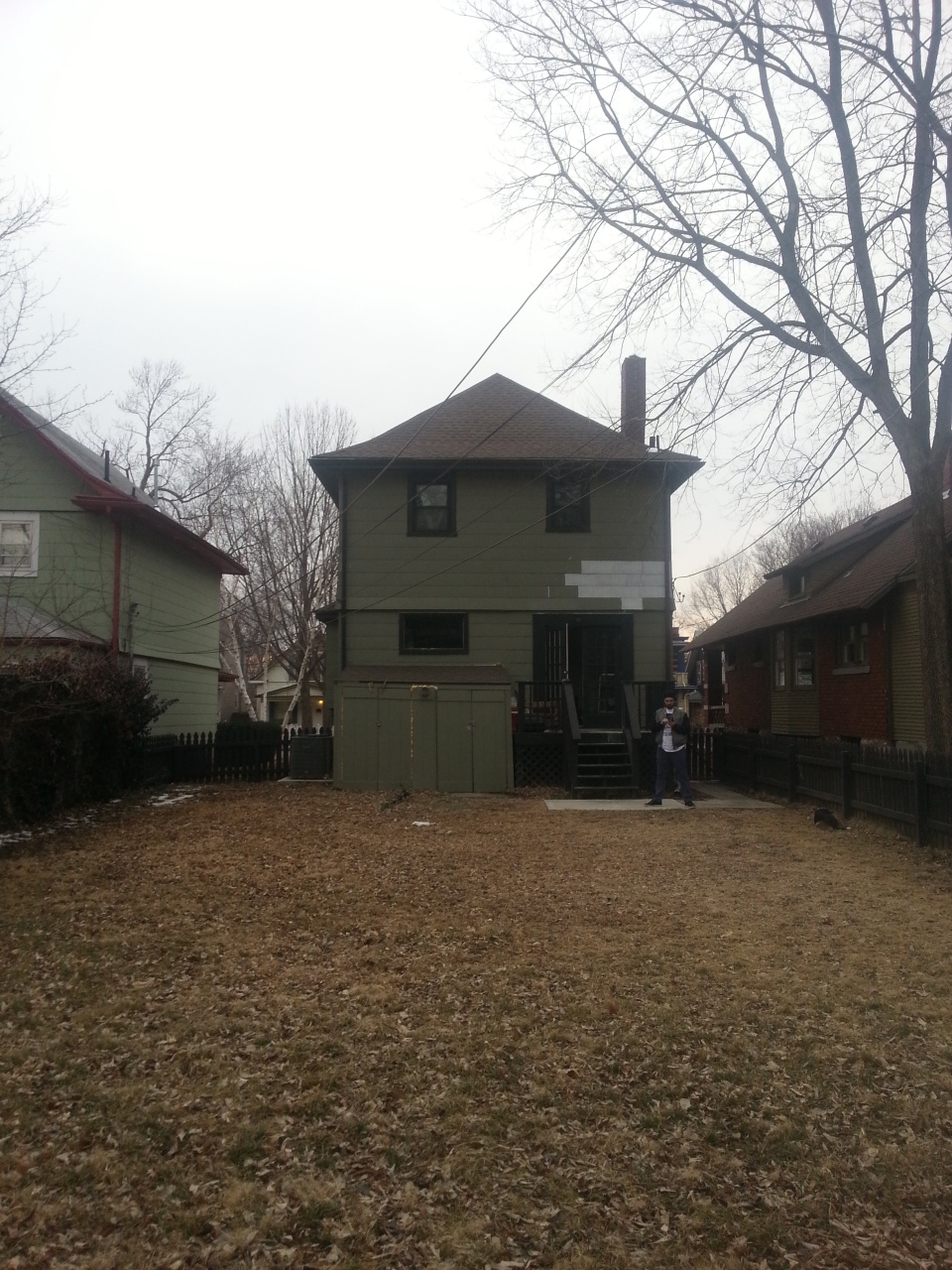 Our claims adjuster was awesome and easy to work with, and since we had a higher deductible, she gave us as much as she could so we were getting our money’s worth, including painting not just the patched area, but both the entire back and north sides of the house “that way the paint matches…” (including the shed!)

So, here we were, with two sides of the house being painted…that same boring blah color. I mean, really, people. Look at that picture up there. BORING. And icky. So we made a decision.

We decided to get the entire house painted.

Of course, like I said before, house painting isn’t cheap. But the contractor who was already doing the repairs cut us a deal, and we actually managed to cover the entire project with our tax return! Fortunately our indecisiveness and inability to agree on house colors gave us the time we needed for that check to come in…

I have, for much of my life, attempted to come to “agreements” and “understandings” in my relationships. I don’t like when anybody “wins”… I’d rather just have my partner understand that I’m “right” 😉 Well, on the subject of house colors, we just could not agree. We were literally on the opposite ends of the spectrum. I used the drawing of the house I made for this blog and the Behr website to try out our color ideas and, ahem, show Jon just how great my color ideas are. After much bickering and about 50 different paint swatches, he finally said, “Okay. You win. We’ll go with your colors.”

It was a little difficult for me to accept winning without him necessarily agreeing with my choice, but I knew, deep in my heart, that my paint color design was perfect. I mean, look at it!

It should be noted that, on screen, Night Shade looks kind of green. It’s not. On the color fan we had, it was situated in the blue family. It looked like a very dark, almost charcoal blue (picture it, I know you can). So I figured it would probably look more blue than green, which is what we wanted, but would be safer than going with a more blue-looking color. I was okay with the possibility of it looking green, gray, or even black (I was too scared to actually go for a black house… what if I just made it look even MORE Addams family?… but I wasn’t opposed to the idea). A search on the interwebs showed me that Night Shade tends to look pretty blue, which would compliment the color scheme we have going on the first floor of the house. So we went with it, and the painting began. 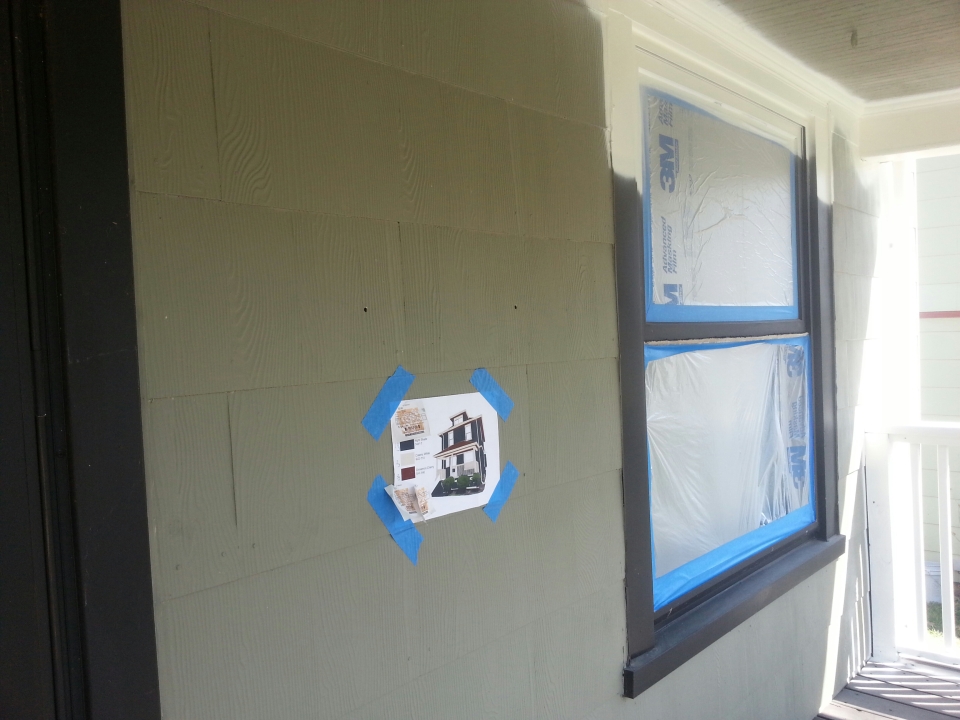 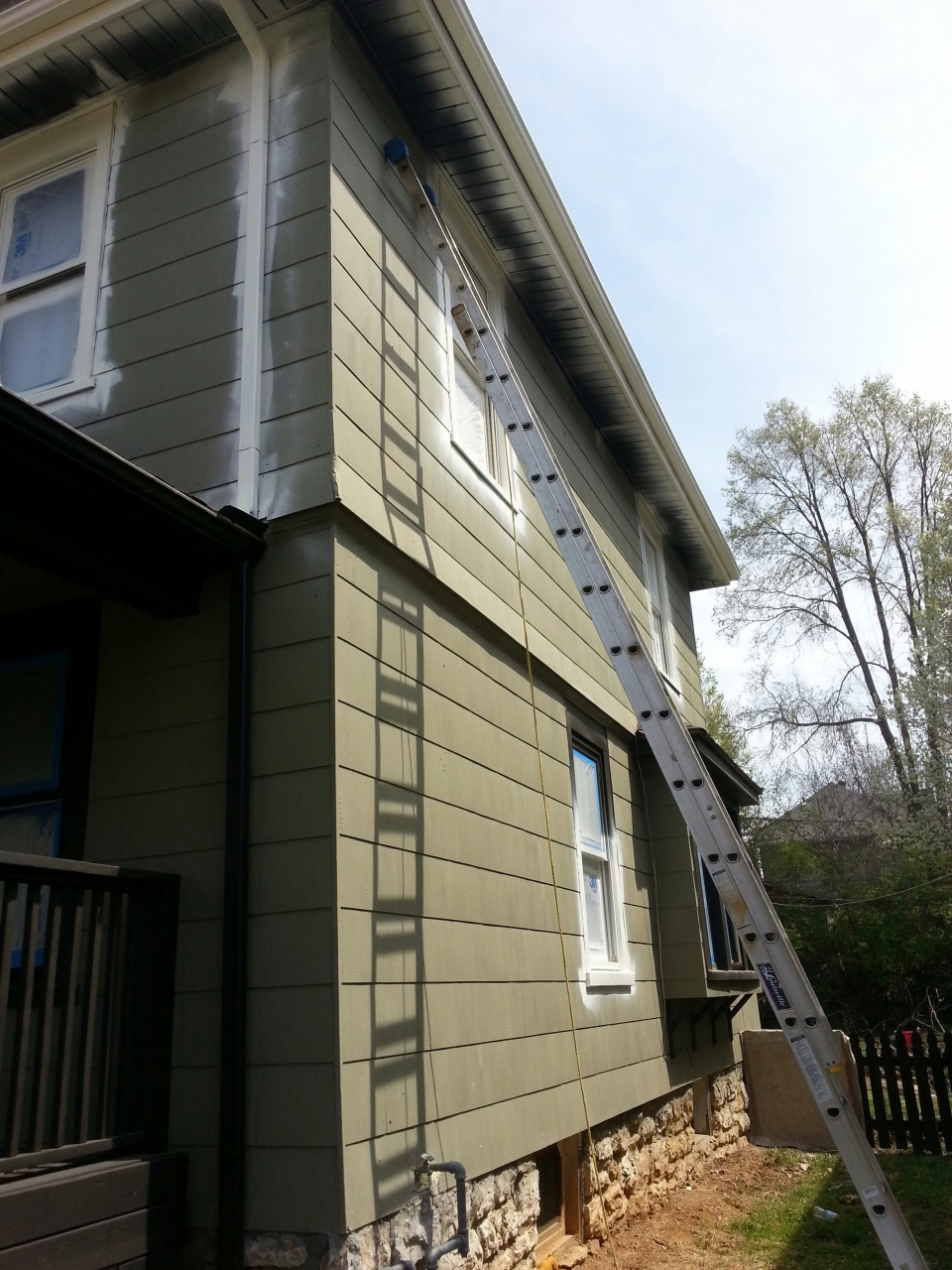 The first thing they did after taping off all the windows was spray on the trim. Oh my gosh, you guys, I can’t even tell you how DIFFERENT our house looks with light trim! It was an instant transformation.

I was freakin’ thrilled. Jon (who had originally wanted a darker trim) started to realize my brilliance… The cream trim makes the house stand out so much, brightens it, and I think actually makes the house look bigger.

When they started adding the body color, (pardon my French) hot damn.

The color turned out pretty much exactly like I had hoped. 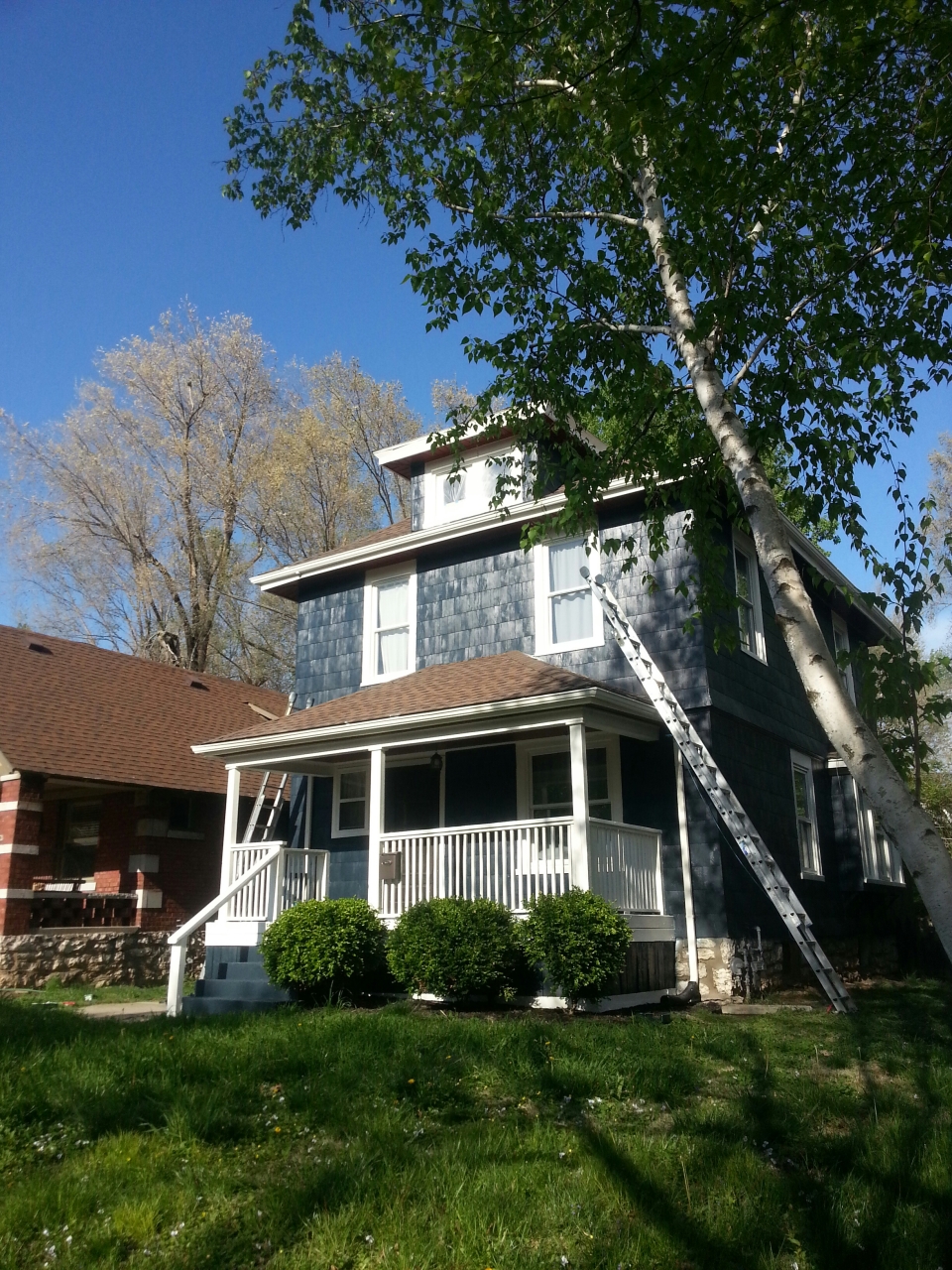 We chose a satin finish, which was supposedly the less shinier option, and I’m glad we did, because dang does that afternoon sun SHINE off our house! Initially it was a little scary, but now I actually quite like it. OH—by the way—that siding we thought was asbestos and needed to be gotten rid of? Not asbestos! It’s actually cement. And the texture is really pretty awesome—something we barely noticed with the drab green of the past.

Now the painting is all said and done, so here are the Official New Exterior Photos!

TA-DA! Isn’t it gorgeous? Seriously. Scroll up to the photo of the house when we bought it. Now look back at this photo. AMAZING, RIGHT?!

It’s hard to see the Cinnamon Cherry porch ceiling and soffets in these photos, but in person it’s much more impressive. They add a nice pop of brightness to break up the blue.

We didn’t like the house-numbers-on-a-plaque thing we had going on before, and for a moment I was afraid we would have to buy new house numbers. Afraid because those things are kind of expensive. I know, I know… they’re not THAT expensive… but we were already shelling out thousands of dollars to have the house painted, and I was feeling a bit stingy. Fortunately, the perfectly lovely numbers attached to the ugly plaque we had were only hot-glued on! Thanks, shitty flippers! So we were able to pop them right off. Jon used liquid nails to attach them to the post, which may not have been the best option as it was a bit messy, but… from here it looks great! 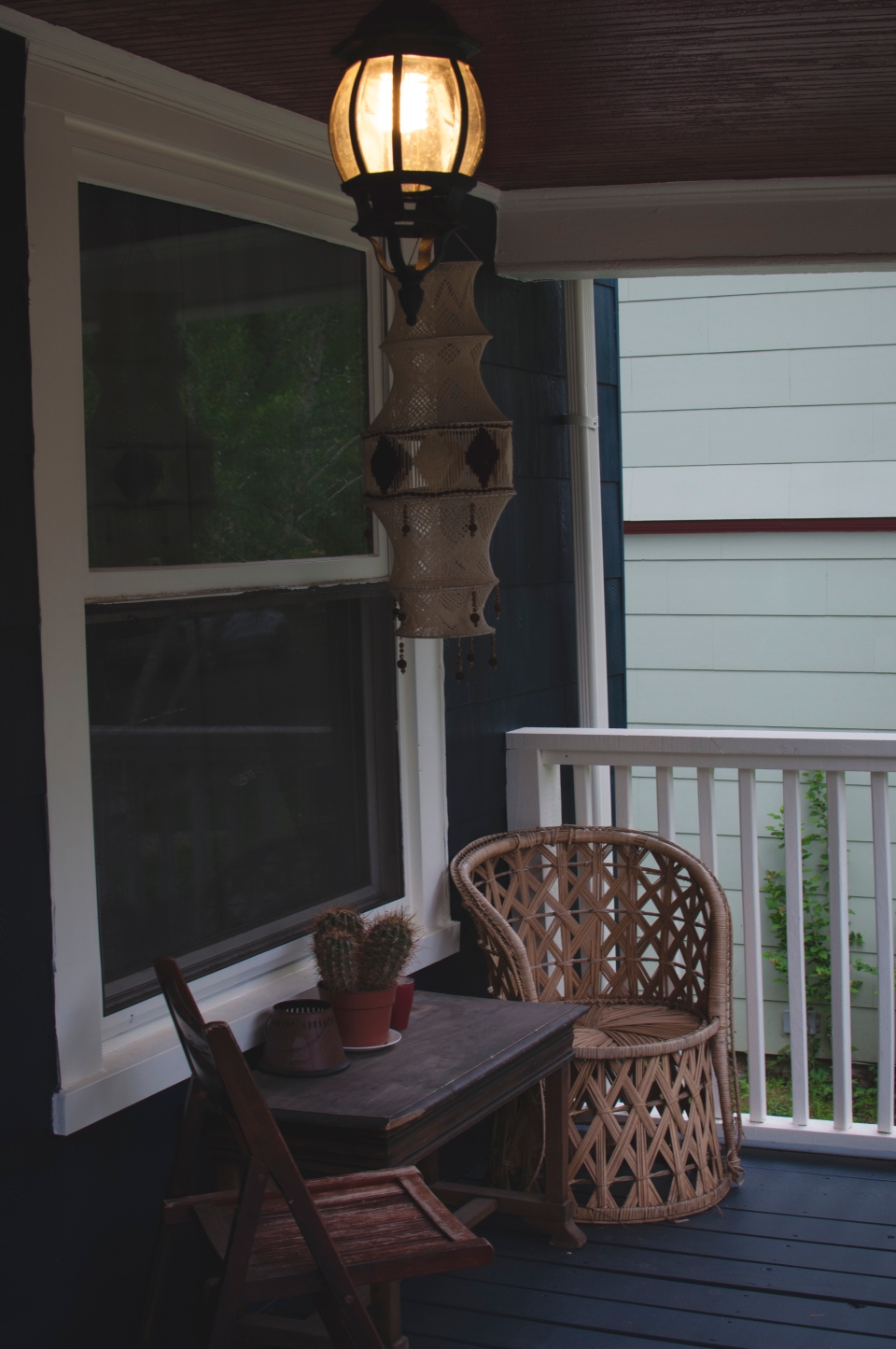 There is still more to be done. We decided to hold off on painting the fence since we couldn’t decide on a color and we’re not sure if we’re keeping the fence or not (the broken bit did get repaired so the pooch could be contained). We also plan to paint the door and screen door red, and haven’t decided whether it will be the same red as the porch ceiling and soffets or if it will be a brighter red. So for now, I’ll leave you with this lovely little photo of our porch, my new favorite place. Fun fact: all of this furniture was free.

Stay tuned for photos of the back of the house and backyard… that area is a bit of a mess at the moment, but we have grand plans for the future!

For this blog’s maiden post, I thought it fitting to share the day we became the DeMontes (read about our name change here). There is so much I want to write about—our amazing venue; the custom, eco-friendly gowns; everything we did ourselves; our custom wedding ale; the music; the photography; convincing everyone to trust my vision; our unconventional schedule; how we managed a “Pinterest-worthy” wedding on a budget; and many more things. But all of those posts will come in time. For now, I would like to share, without words, our wedding: 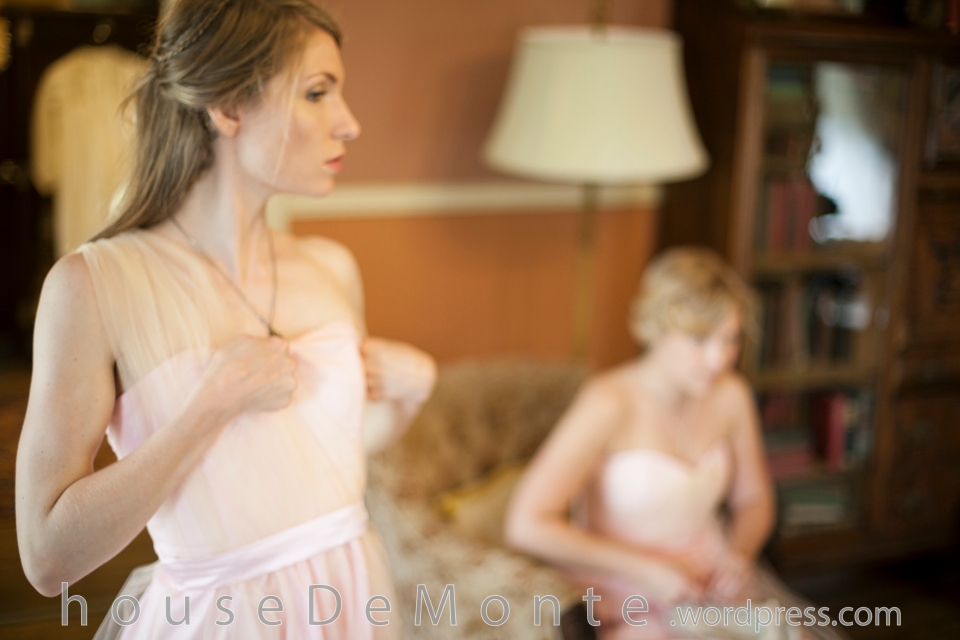 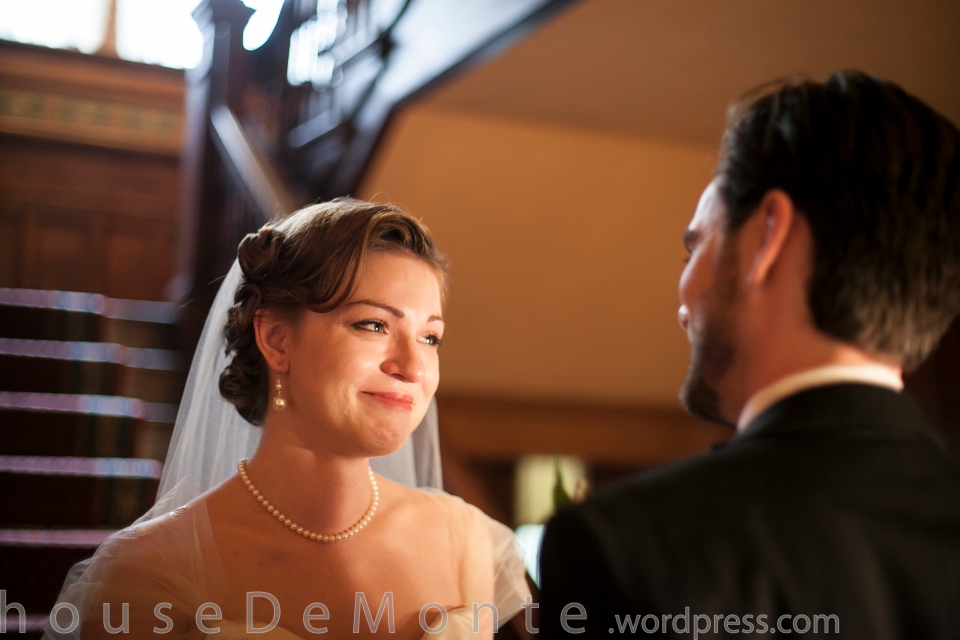 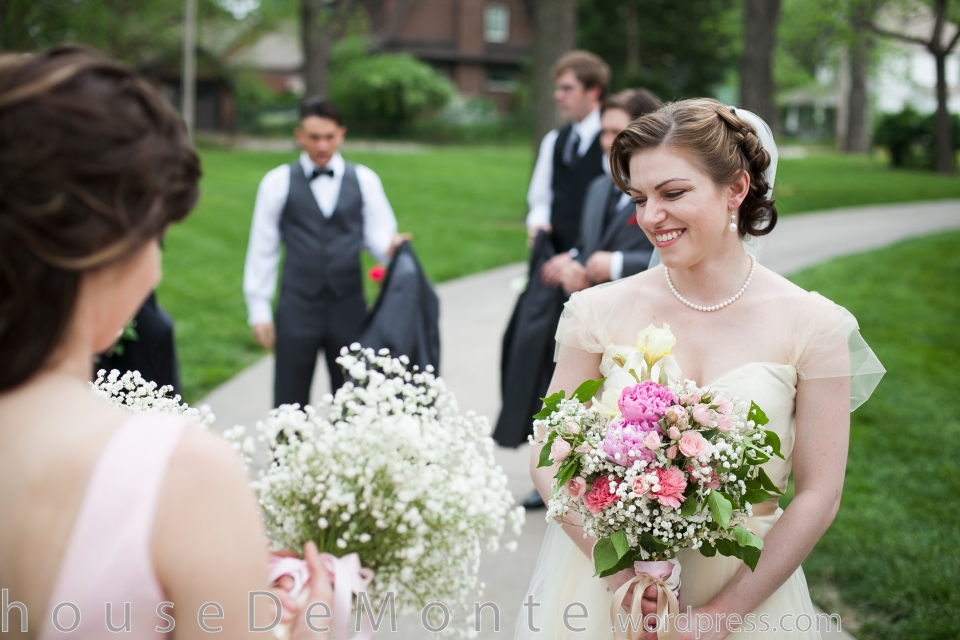 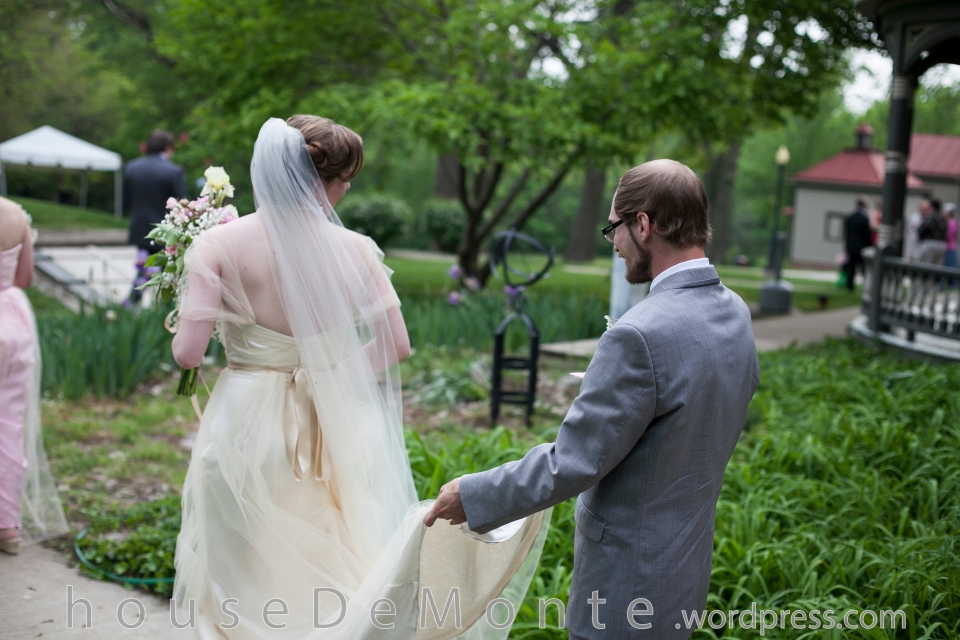 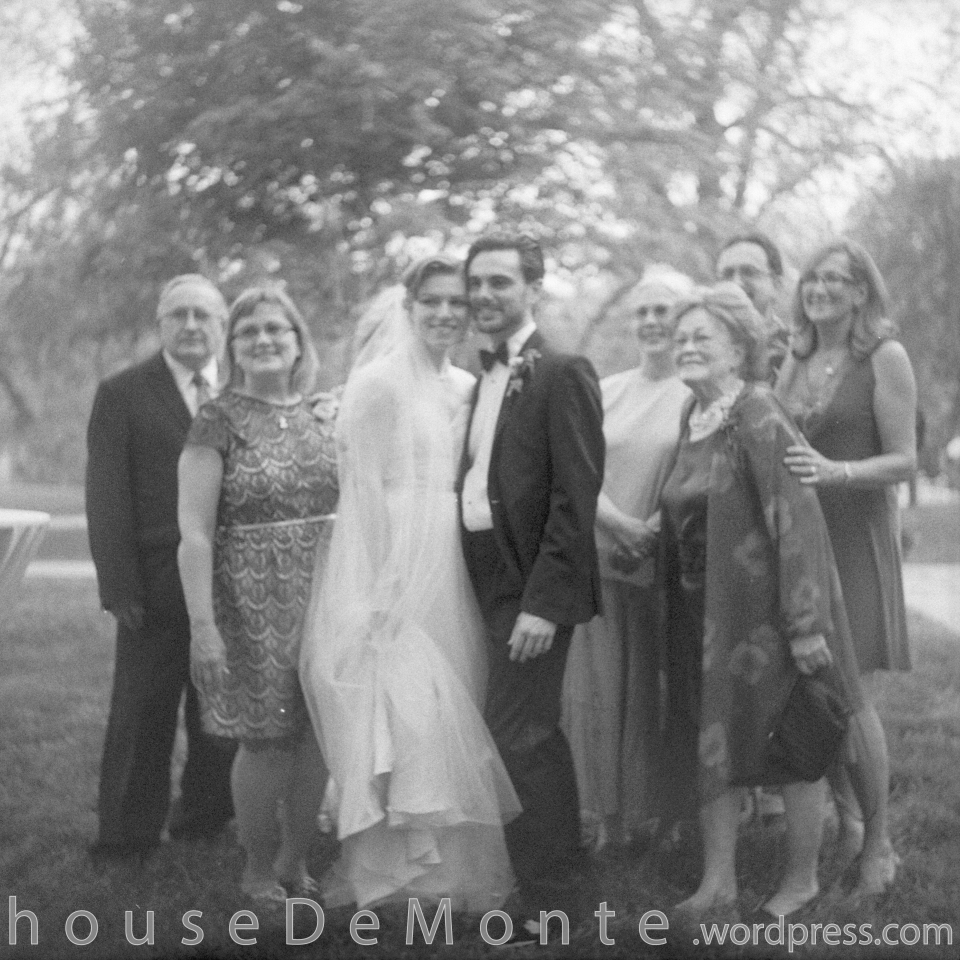 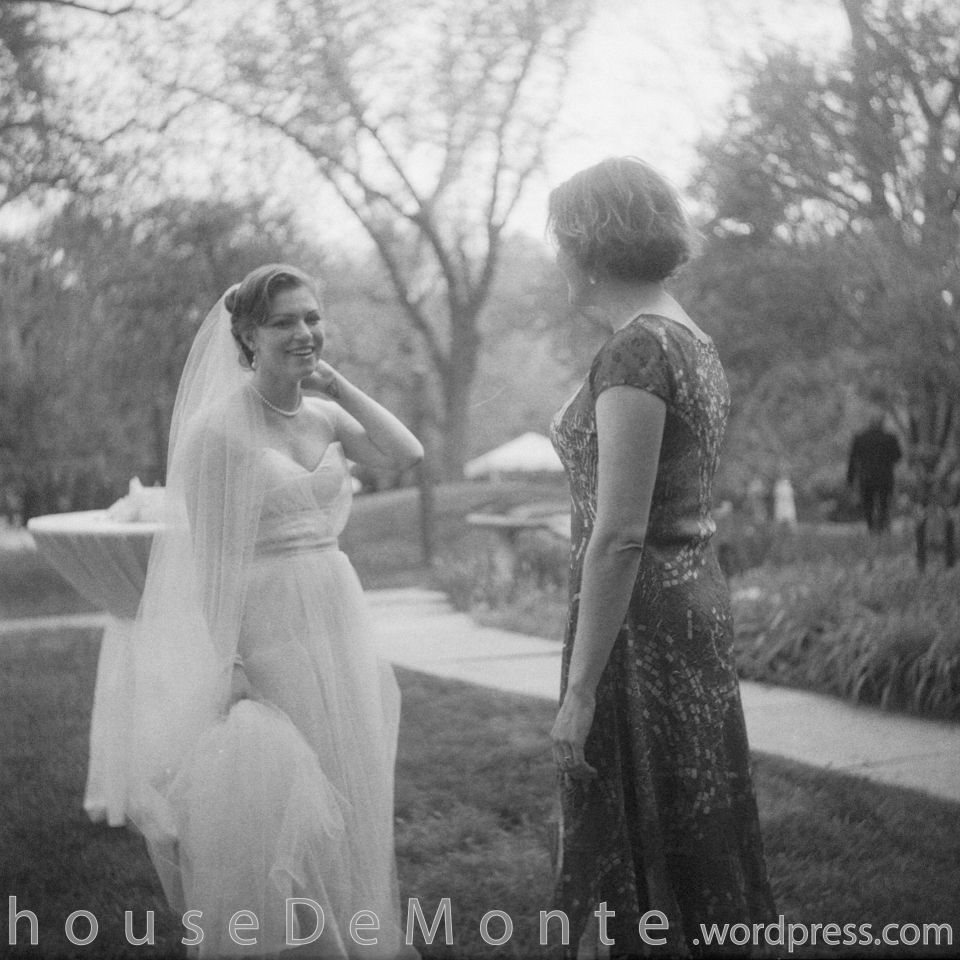 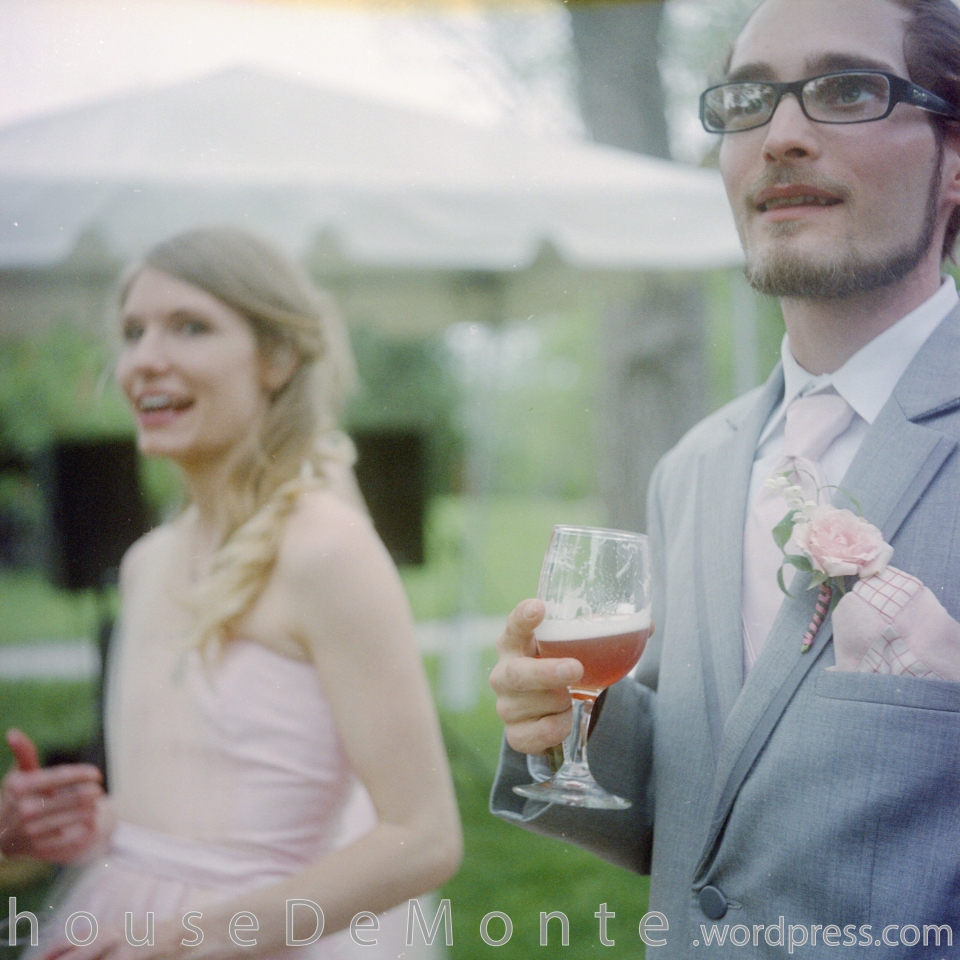 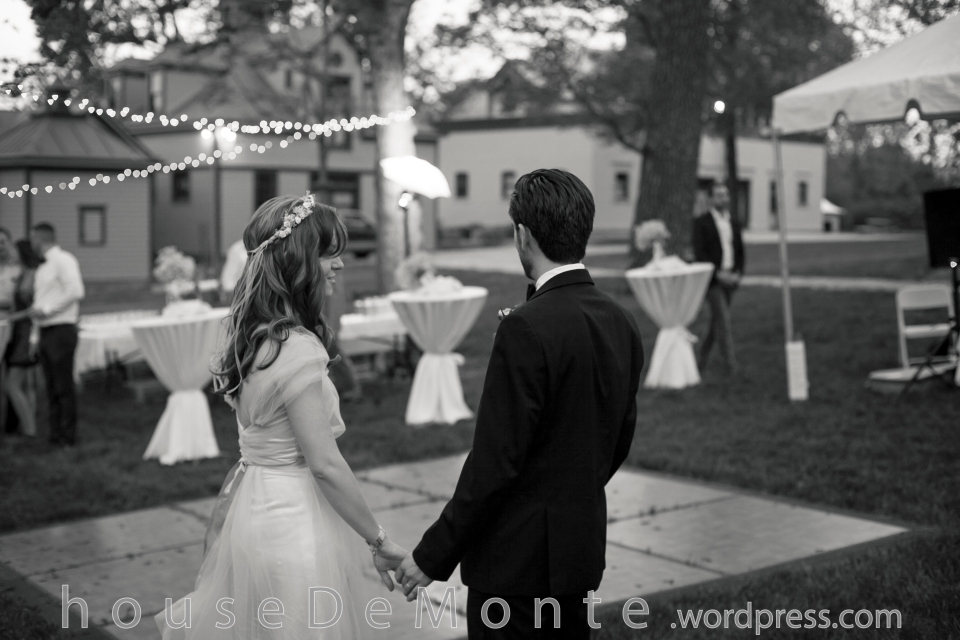